**Disclaimer: I received a free race registration as a Sweat Pink Ambassador, but as always all thoughts and comments are my own.**

Hello friends! How's the week going for ya? Mine is going slow and steady. But you know what they say... "Slow and steady wins the race"..unless someone runs faster than you. Then you can kiss that cash prize goodbye. But we're thinking positive, right?!

Any-scootles, let's get down to bid-ness. This weekend had probably the best weather known to New England-kind. Sunny and 75 as simply put by Joe Nichols. I love the chilly nights and mornings that turn into sunny days, except when your early mornings are started in shorts and a t-shirt. It was worth it though to run the Color Me Rad race on Saturday. 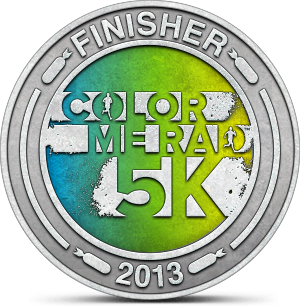 I spent the Friday night at Papa John's since our departure time for P-town was about 6:30 am. I discovered that the race wasn't actually in Providence, but in Seekonk, MA at the Seekonk Speedway. Seekonk. Providence. Same diff, right? I'm guessing they use the closest major city to name it after since Seekonk isn't quite the household city name. I mean, I always thought it was a type of seashell...

Once we arrived, we picked up our bibs, t-shirts, and well needed stunnah shades to avoid a permanent case of pink eye. Or blue eye. Depends on which color station you get blinded by. We had some down time before our heat started so we stopped at some of the vendor tables such as Larabar and Zico. After trying the chocolate coconut water, I can say it was tolerable, but I still would not choose to drink it. We also actively watched people do Zumba and get rained on by color bombs. I'm still not sure why Papa John didn't want to dance to "I'm Sexy and I Know it." Awk-ward. Once our heat was up, we corralled at the start line where I proceeded to dump my pink color bomb on Papa John's head. Like I've said before, because I'm a loving daughter like that. The race started off slow since there were so many people at the start before we could spread out, but once we were free it was on.

We passed through 4 color stations: Pink, Blue, Purple, and Orange while additionally being sprayed by green tinted water guns. Despite inhaling a decent amount of blue cornstarch (yes that is what this color stuff actually is), the race was pretty easy going. I'd have to say it was the most laid back race I've ever run, since 95% of the people weren't actually running. This did get a bit annoying since I would have to swerve my way around baby strollers and youngins, but luckily I didn't take any of them out in the process.

Since this was such a laid back race, I didn't even bother to track my time, and I didn't really care all that much either. My nickname for this race is the happy run, because I honestly don't think you can take a race too seriously when you look like a human pixie stick.

At the end we got another color bomb, which mine of course was pink. I didn't think Papa John had enough, so another pink shower it was. I claimed him as the sweat pink mascot since he was quite literally sweating pink. Overall it was a beautiful day to get colorful. My legs looked like an 80 year old's since the green spray gave me insta-varicose veins. We also may have turned a couple heads at the gas station on the way home. It was worth it. Not to mention the day ended with my last one of the season... One happy colorful gal. Thanks again to SPA and Color Me Rad! What made your weekend rad?