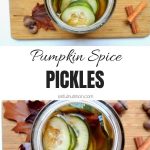 This recipe was originally posted in 2014, but has since been updated.

Remember once upon a time during the summer when I got cucumbers stuck in my sweet tea?

Yeah, it happened again. Except this time it was Autumn and pumpkin-mania had commenced. I wish it was Wizamania and I was watching Wicked on Broadway again. Any other Wicked obsessed peeps out there?

Again, I found a way to make a seasonal spin on my second favorite food to eat out a jar. PICKLES.

How to make these pickles

In a medium saucepan, add 1 cup of water, ½ cup apple cider vinegar, ¼ cup brown sugar, and ½ tablespoon salt, and heat over high heat until boiling. Remove from heat, and pour over prepared cucumbers. Let the jar(s) cool to room temperature before screwing on lids, and refrigerating for a minimum of 2 hours, or overnight for best flavor.

How long do these pickles keep?

If stored in the refrigerator in a sealed container, up to 3 weeks. I've never tried freezing them, so can't speak of how they would keep or come out after freezing.

Can I use ground cinnamon instead of cinnamon sticks?

You can, but I find the flavor is better, and the pickles have less of a powdery texture from all the ground spices when cinnamon sticks are used. If you can't find them, you can substitute for 1 teaspoon ground cinnamon.

Buy in bulk. Shop for ingredients you use often, like salt, brown sugar, or vinegar in bulk sizes for a more cost-effective option.

Shop sales. Stock up on cucumbers when they are on sale, or on discount, and make a double batch of these!

Did you make this recipe? Leave me a comment and a rating to let me know how it came out!

Pin this to your Pumpkin board!