Happy fricken hump day! Boy, I’m glad that this week is half over. I’ve been enjoying training sessions for the new job, which leads to 12 hour days of sitting on zee bum all day.

Although I’m getting a lot of great info (no more meal pattern!) and getting my network on, the long days of anti-physical activity all day is not enjoyable for this ADD active gal.

On top of that, by the time I’m done swallowing my entire left side out of hanger, I lack the time, sunlight, and energy to fit in a run. I guess I’m taking a bit of a spontaneous recovery period from my long run, but I am really gunna force myself to at least a 3 miler tonight, and tackle the books for the RD exam. This weekend, I made a couple new recipes to try out for the blog, and of course my selfish consumption. I’ve had this strange but good idea for a caprese monte cristo, which felt like an italian breakfast sandwich to me. If only I was sitting outside a bistro with a cuppa ‘spresso. Instead I ate it standing over my stove. Foodie problems.

MJ also told me about a recipe for sweet potato hummus that her co-worker made and since I’m part carrot, I’m distant cousins to sweet potatoes and had to share my love.

Now that I’ve shared my red/orange love, on to the fitness. Instead of logging in some exercise time, I’ve decided to blog about it instead. Dedication I tell you. I’m trying to live up to my pinterest counterparts..

I’m still super pumped that I am getting the opportunity to run the Color Me Rad race in September in the fabulous P-town. This got my race blood pumpin’ in my brain about all the races I want to do in my lifetime. Instead of giving more un-needed attention to Pinterest, I thought I would dedicate today’s post for 4 Must Try Running Races Before I Die. Yes, most involve food and firemen. It’s called motivation people. 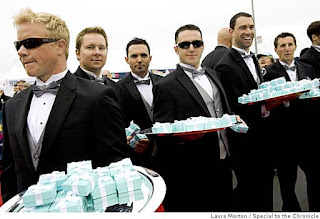 Ok, seriously someone needs to buy my plane ticket, registration, and a new set of legs because I am destined to run this race. For those of you who are blissfully unaware the Nike Women’s marathon in San Fran finish line is bombarded with FIREMEN handing out TIFFANY necklaces! Pretty much my wish at the end of a 26.1 mile rainbow. Oh, and not to mention it’s on my BIRTHDAY this year! The firemen of San Fran are calling me. Heck, I’ll run all the way there if a fire stud is holding a Tiffany solitaire instead of a necklace. And a bottle of chocolate milk. A girl needs some fuel to say I do after running cross country, you know.

So I guess I should include this race as part of my trip to Cali before getting hitched. Rockfest is the half marathon I intend on calling my first this October. Not only is it right along the beach, but is rewarded with Smuttynose beer and lobster rolls! Both of which will probably be the last thing on earth I want to ingest after 13 miles of running, but it sounds great right now. I wonder how hard it would be to run in a wedding dress? So I guess my hubby and I will celebrate our honeymoon with a marathon around Paris. I’ve always (and am planning on) visiting France, and what a better way to site-see the Paris then by running around it! It starts at teh Champs-Elysees, pass the Louvre, Eiffel tower and Notre Dame. And what better way to end a site-see-athon in the city of Love than with a plae full of crepes. Allons-y! Don’t get too worked up now, this one is on the lifetime achievement bucket list. After I get married and down gallons of beer and crepes via marathons, I feel like I’ll have worked up an appetite (and loss my marbles) to attempt an ironman.

The first ironman race was held in Hawaii, and the annual Ironman World Championship is in Hawaii, so what better place to attempt one (and therefore end my life) ? PS, an Ironman Triathalon consists of a 2.4 mi swim, 112 mi bike ride, and 26.2 mile run. Oh yeah, and a death wish. You can bury me in the pink sands with my medal around my neck and a coconut drink in my hand.

What races do you want to do before you die?

What has been your favorite race you’ve completed?