Happy Wednesday friends! Are we all surviving the week so far? My days have been quite busy which makes them go by fast. Too fast some times.

There’s so many things I plan on getting done, until I realize it’s already half past my Granny bed time. One thing I am not a fan of is the fact that it keeps getting darker and darker with each minute of Fall. I’m thinking my runs will be turning into glow runs before I know it.

Because after my death run scare, I plan on becoming a human glow stick if I ever think I will be running in dim lighting, let alone pitch blackness.

Speaking of scary runs, I’m pretty sure I ran through a hurricane on Monday. It was sooo windy, and I got caught in some heavy downpours a few times but they didn’t last long.

I was actually kind of happy when it rained since my house feels about 20 degrees colder than it is outside, which makes as much sense as vegan bacon. Either way, I ended up wearing a long sleeve shirt which wasn’t the best choice in the muggy hurricane weather. It was a pretty tough run so I was plenty satisfied with an easy 4 miles before I got picked up to Munchkinland somewhere over the non-existent rainbow. So some of you might be wondering, what the heck motivates me to run in hurricanes, humidity, or just in general?! Well I think I can speak for all runners when I say that this is all you need for motivation. 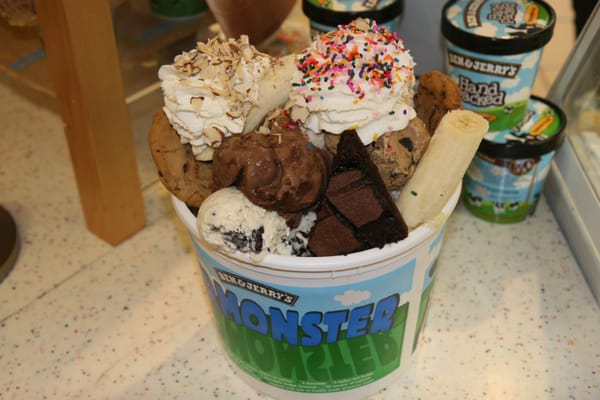 Just in case you have never heard of the “Vermonster” it is a Ben & Jerry  ice cream challenge to eat the entire thing in one sitting to get it for free. But the night spent in the bathroom regretting every dairy decision of your life is always free of charge. Here’s what this bohemoth includes: 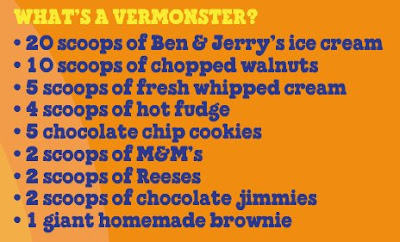 I’m thinking I wouldn’t have to eat for a solid week if I polished this thing off. Okay, so hopefully you’re aware of my sarcasm by now, but I don’t suggest attempting this unless you just finished an ironman triathlon.

While ice cream is always a motivation to celebrate a great run, there are many other things that motivate my runs. One of the main things that gets me through any run is a great playlist. Now I love me some Beethoven as much as the next gal, but let me tell ya “String Quartet No. 14” doesn’t motivate me as much as “Birthday Cake” by Rihanna does. And it’s not even my birthday.

I’m always looking for new songs to get me bumpin’ along the road and look like a crazy person singing to myself. I created a playlist for my long run since my ADD  won’t allow me to run for any more than 20 minutes without something to distract me.

It has a good mix of different styles of music at different speeds to keep my ears and feet interested during those long runs. Or even short ones. Or even as I sit on my couch typing this. Hey, it’s motivating me to write this, right?!

Here’s some fun facts on some of the songs I picked:

“Roar” is seriously my most motivating song right meow. It always seems to play when I am dying of death (hope you’re reading this soul roomie) during a run, and always pushes me through to just keep running.

Yes, I have OneDirection on there. To be honest, I don’t even know much about these boys, except that they don’t touch JT and Nsync with a 10 foot pole. It is a pretty catchy tune though that I have no shame of singing along to.

“I Can’t Stop” is the song that seriously got me through my last long run. In the first 20 minutes I got the most crippling side cramp that I thought was going to make me turn around and give up. Until this song came on. A message from the Flux Pavillion gods to keep going. 9.5 miles later, I finally could stop. And almost collapse, but I made it.

“A Little Party Never Killed No Body” makes me wish I was running to a Great Gatsby party since that is where I discovered this song. I run just a little faster in hopes that Gatsby will be picking me up with a glass of champagne. I’m still waiting Gatz.

I was introduced to “Inner Ninja” from my HLS13 roomie, Katie which makes me miss her and the rest of the gals a little bit every time it comes on. It also makes me wish I was sitting in a skype session of Katie’s yoga class because she’s amazing. And it’s ultra motivating. Hope some of these motivate you through your next workout! Happy Hump Day!

What motivates you through a workout?

Previous Post: « Rad To The Bone: A Color Me Rad Review
Next Post: Fall Adventures in CT »